The Tempered has had life-changing experiences. But, like a well-tempered sword, after being shaped in fire and facing the heat they’ve become honed, sharp, and capable. They want to forge a new life filled with love. But they must first find balance — weighing safety, stability, and vulnerability against change, justice, and facing foes.

Balance your sharpness and tenderness with The Tempered,  a new unofficial playbook for Thirsty Sword Lesbians. This Powered by Lesbians community playbook includes 5 beautiful pages of content, including:

The Brooding or Burning Hero
This playbook takes inspiration from the brooding, silent sword-for-hire archetype and the throw-caution-to-the-wind fighter archetype.  But it intentionally adds in moments that break the silence and offset the conflict, so allies and adversaries  alike can  feel the angst from your character’s troubled past and see their yearning for the chance to be vulnerable and be close to someone again. It also leaves room for building new relationships, with moves like Test of Mettle and A Life You Once Loved.

Unstoppable, Unbreakable
Get those cinematic climactic moments with The Tempered’s core playbook feature, Mettle. When your Mettle goes off the scale, your character can become either Unstoppable or Unbreakable, giving them incredible, spotlight-grabbing powers. Each one comes with a cost, though — one that makes it more likely for allies and adversaries alike to reach out and try to get closer.

Level Up Your Zingers and Flirts
The Tempered isn’t all brooding and physical conflict. Flirts and charged moments are easy to get too, with a range of moves that let you choose whether to dig into angst or keep it flirty and fun.

Not into any traumatic past, but still want to up your flirting? Whet Your Appetite is great for your next flirty playbook advance. If you’re looking for your current character to get more impact from heated retorts or icy glares, Hot and Cold helps you deliver.

This setting was designed in the Tamien Nation and Chochenyo lands, also known as San Jose and Oakland, on the unceded territories of Chochenyo, Muwekma, and Tamien Nation Oholone peoples.

Despite state-sanctioned murder, land-theft, and marginalization, the people of these nations and lands still live in these lands, practicing their traditional culture and religion. You can support them through donation, learning about them and their culture, and being mindful of how you represent indigenous communities and colonial forces in the stories you tell.

This playbook was designed by Christie R. Fremon.

Thirsty Sword Lesbians™ is a trademark of April Kit Walsh. The Powered by Lesbians Logo is © April Kit Walsh, and is used pursuant to the open licensing terms at http://poweredbylesbians.com

In order to download this playbook you must purchase it at or above the minimum price of $5 USD. You will get access to the following files:

Support this playbook at or above a special price point to receive something exclusive.

If you aren’t able to purchase this playbook due to financial hardship or dependence on someone not supportive of your identity, please take a free community copy. 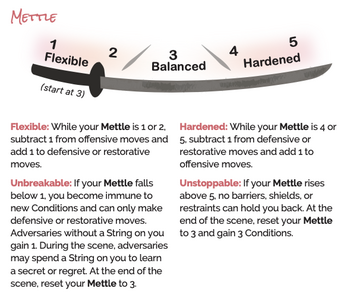